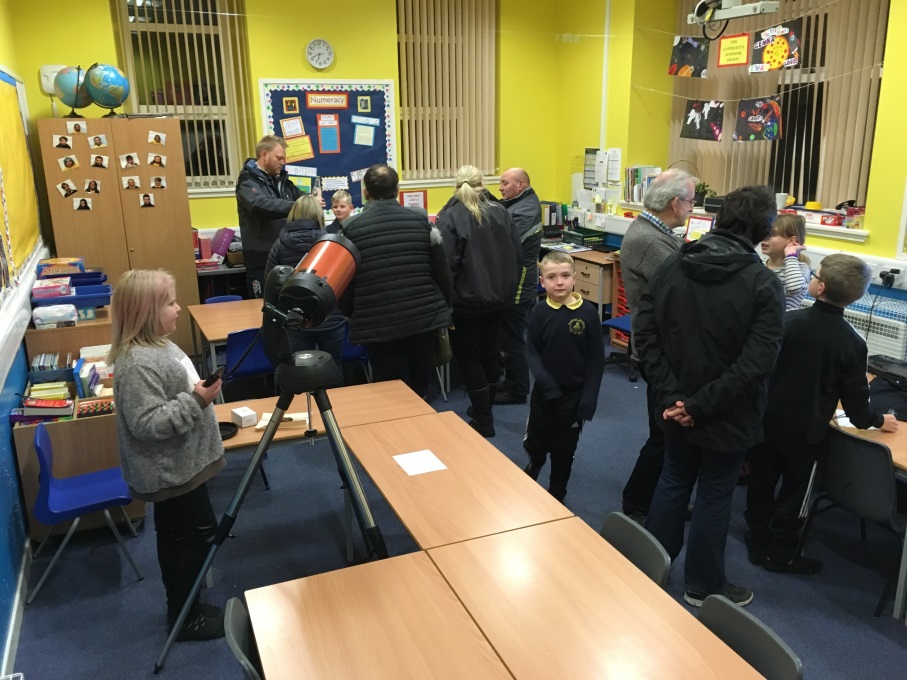 Our trip to the Isle of Mull was our first formal AfRIS visit, and it’s fair to say that the weather was mixed – with sun, rain, strong winds and snow. We elected to arrive on Mull, via a ferry from Oban, the previous day, to ensure that we could make an early start. The drive across Mull was done in the dark and along 30 miles of quiet, single-track lanes. As the return journey proved, the scenery was dramatic, although all we could see was the occasional deer and a few hail storms as we approached. Afetr a comfortable night in the local hotel, we were at a snowy school to set-up ahead of the formal start to the day. We started with the Earth, Sun and Moon for the younger children (P1-P4) and then ran the solar system workshop with the whole school. The hands-on play-doh planets and toilet roll (actually, we used till roll) orbits was well received, and saw older pupils guiding younger ones through a series of tasks. We finished the morning with our look at stars and constellations, which saw pupils constructing their own planispheres from a template. In the afternoon, we focused on our nature of light activities, which were again well received by all, and generated a good number of ooohs and aaahs. It’s wonderful to see science demonstrations generating the same response as if it could be magic.

After a busy school day, we had a well deserved break to explore the local village, and then back to the school to set-up for the evening community event, which the pupils decided should be a mini-science-expo at the school. Given that the snowfall and winds had increased steadily throughout the day, we half expected just a handful of people to brave the icy roads and freezing temperatures. In the end, we were totally amazed that 55 people arrived for the event, which saw pupils demonstrate some of the science they had seen during the day. Visitors were able to move from room to room to observe different aspects of science, and enjoy a cup of tea and cake into the bargain. All in all, a very successful visit, that was made all the more special by the hard work of the pupils and the wonderful support of the community.