Chris is a senior lecturer and astronomer at the Astrophysics Research Institute (ARI) of Liverpool John Moores University (LJMU). His academic qualifications include an MSci (Hons) Astrophysics and Ph.D in Astronomy, both gained at the University of St Andrews. From 2004-2014, Chris was the NSO project manager, during which time he gained extensive knowledge of using professional robotic telescopes to enthuse primary and secondary students about physics, science and technology. Since 2014 he has been the NSO’s strategic projects coordinator, which has involved both national and international astronomy-education activities. He maintains a small interest in research, which is associated with the detection and characterisation of close-orbiting extrasolar giant planets, and has 14 refereed articles and conference proceedings to his name. Chris is also the Parent Council treasurer of the small school (15 pupils) his children attend, and so fully understands the limited opportunities and difficult funding choices that small and remote schools face.

Stacey is an astronomer and project manager at the ARI of LJMU. She has previously completed an MPhys (hons) in Astrophysics (2008), PGCE in Secondary science (2009) and PhD in Astrophysics (2013), followed by a short post-doctoral position. Her field of expertise is core-collapse supernovae and their host galaxy environments, with an interest in star formation, and this has led to 10 refereed publications to date. Since 2014 Dr Habergham has taken over the role of NSO project manager, and alongside this has held the role of Ogden Trust Science Outreach Officer at LJMU since 2013. She is also a STEM Ambassador. All of these roles formalise the experience she has gained in science communication and outreach, which spans 10 years working with a variety of groups.

Chris Copperwheat is the Liverpool Telescope Astronomer-in-Charge, responsible for the running of the day-to-day science operations of the telescope. He obtained his PhD from University College London in 2007, and then took a postdoctoral research position at the University of Warwick. In 2012 he moved to LJMU to develop the science case for Liverpool Telescope 2, and then changed to his current position in the group in Autumn 2015. He is an experienced observational astronomer, with over 200 nights of experience on 2- to 8-metre class telescopes. His research is focused around the study of white dwarfs and black holes in binary systems, although his main current interest is participation in the electromagnetic follow-up of gravitational wave events discovered with the LIGO and VIRGO detectors. In the past five years he has been a contributing author on ~50 peer reviewed publications in high impact journals. He has extensive experience with outreach activities at all levels from primary school to A-level to local astronomy societies, and is a registered STEM ambassador.

Scott Marley is the project’s science communicator, and as a core member of the AfRIS mobile outreach team, is responsible for the creation and delivery of the AfRIS workshops and activities. He gained an MPhys in Physics and Astrophysics from the University of Manchester in 2007 and shortly after, went on to work for Bradford University as the education officer for the Bradford Robotic Telescope. Since 2012 he has worked with many organisations to develop and lead their physics and astronomy outreach activities. These include summer schools at major universities, writing content for SEPnet, speaking at science festivals such as the Big Bang and hundreds of shows and talks in schools around the UK. He has also been resident astronomer at a telescope in Namibia and has taken groups of school pupils on trips to China and India. His extensive experience of science and astronomy outreach enable to him to answer some of the more difficult questions posed by young and enquiring minds! 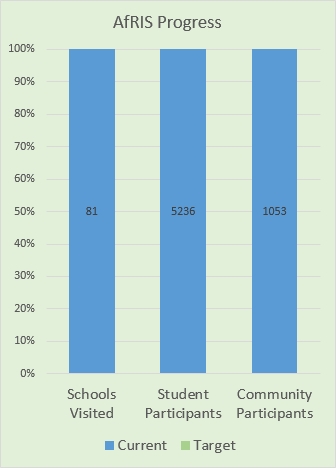