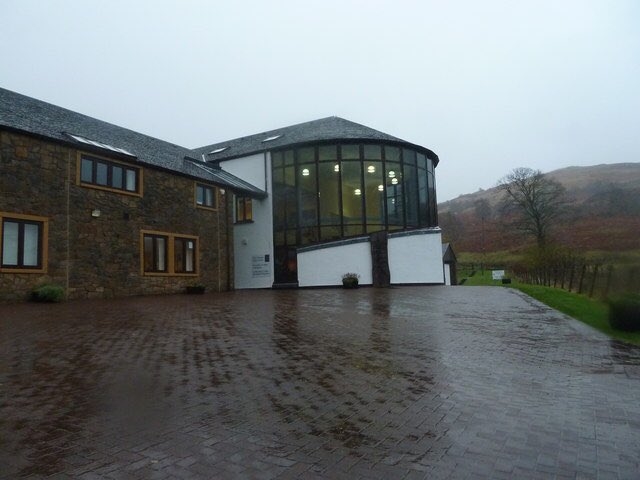 After an overnight stay on the banks of Loch Linnhe, we headed inland to the community of Strontian, where the chemical element Stontium was first discovered. The village is the home of Ardnamurchan High School, which serves an area roughly the size of greater London, but only has 120 pupils. Today was a day of many firsts, because the school had requested a number of workshops that we hadn’t done before. It was a very wet day, but the school had wonderful indoor resources, including a stage and sound system we could use, but which also acts as the area’s cinema. After running the ‘Solar System’ workshop with the S1 pupils, we then took two groups of S2 (a large year group) through a newly created ‘Galaxy Zoo’ module, where students end up classifying different types of galaxies. We then moved to the theatre, where we gave an ‘Introduction to Gravity’ workshop, closely followed by our Space Exploration talk to the whole school. After lunch, we worked with the S4-6 science group (around 18 students) and did the first run out of our ‘Introduction to Cosmology’ talk, which seemed to be well received, despite the mind blowing concepts involved. It was a lot of information to take in, but the students managed really well and were full of questions. We finished the day with a brief look at some of the techniques being used to look for planets around distant stars.

In the evening, we returned to the school to run an hour-long community event, which involved a brief ‘Solar System’ talk, followed by the start of our ‘Nature of Light’ module. Amongst a huge range of ages, we had the local cubs/beavers group join us. In all, 42 members the community joined us for the evening. It was then time to head to the small village of Lochaline, to position for an early morning ferry across the the Isle of Mull, and then onto Iona.