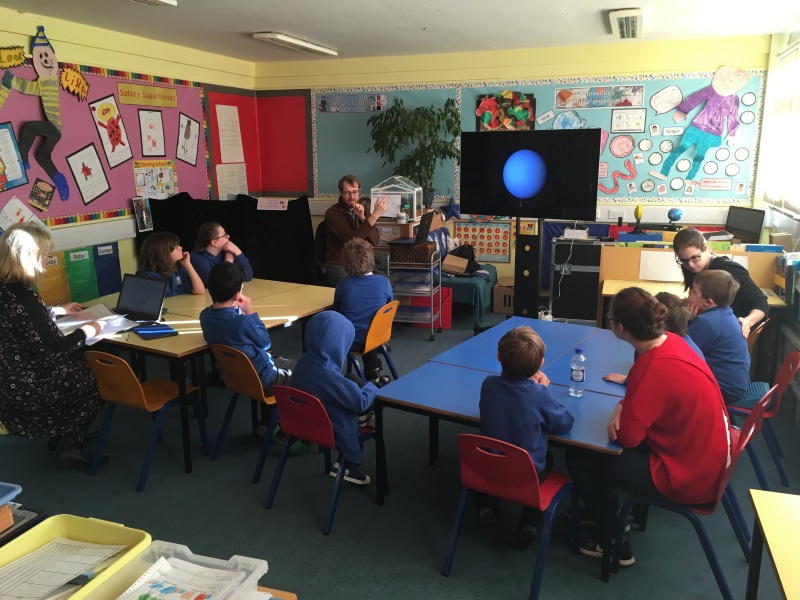 After staying at a beach hotel on Kintyre, we caught the 9am ferry and had a rather bumpy crossing to the Isle of Gigha. Although windy, the weather remained dry and allowed us to unload and set-up in the school for a 9:45 start. The school had agreed on a slightly more advanced range of modules, which started with an Introduction to Gravity – not an easy topic at primary level. The robotic telescope activity allowed us to introduce our own robotic telescope in the Canary Islands – the Liverpool Telescope – and we soon had pupils requesting their own images of a variety of objects, including planets, the Moon, nebula and galaxies. We gave some basic instruction in astronomical image processing, and it wasn’t long before pupils were measuring the size of Jupiter and searching for asteroids. We finished the day with a nice introduction to galaxies, which not only put their beauty on show for all to see, but also blew minds with the sheer vastness of the Universe in which we live.

After the school day, we had a couple of hours to spare before the evening community event, so the team took the opportunity of touring the island from north to south, and also enjoying the winter delights of Achamore Gardens. For an island with only 180 inhabitants, we met many friendly faces on our tour.

We returned to the school around 5pm, and set up a number of demonstrations for the pupils to demonstrate to the community. Come 6pm, we counted 38 members of the island community had joined us at the school, and the pupils showed great responsibility and resolve in order to share some of the science that they had seen during the day. Getting nearly a quarter of the island’s community into our mini-expo, was a great success, and we hope that the inter-generational conversation about science will continue well beyond our visit to these shores.